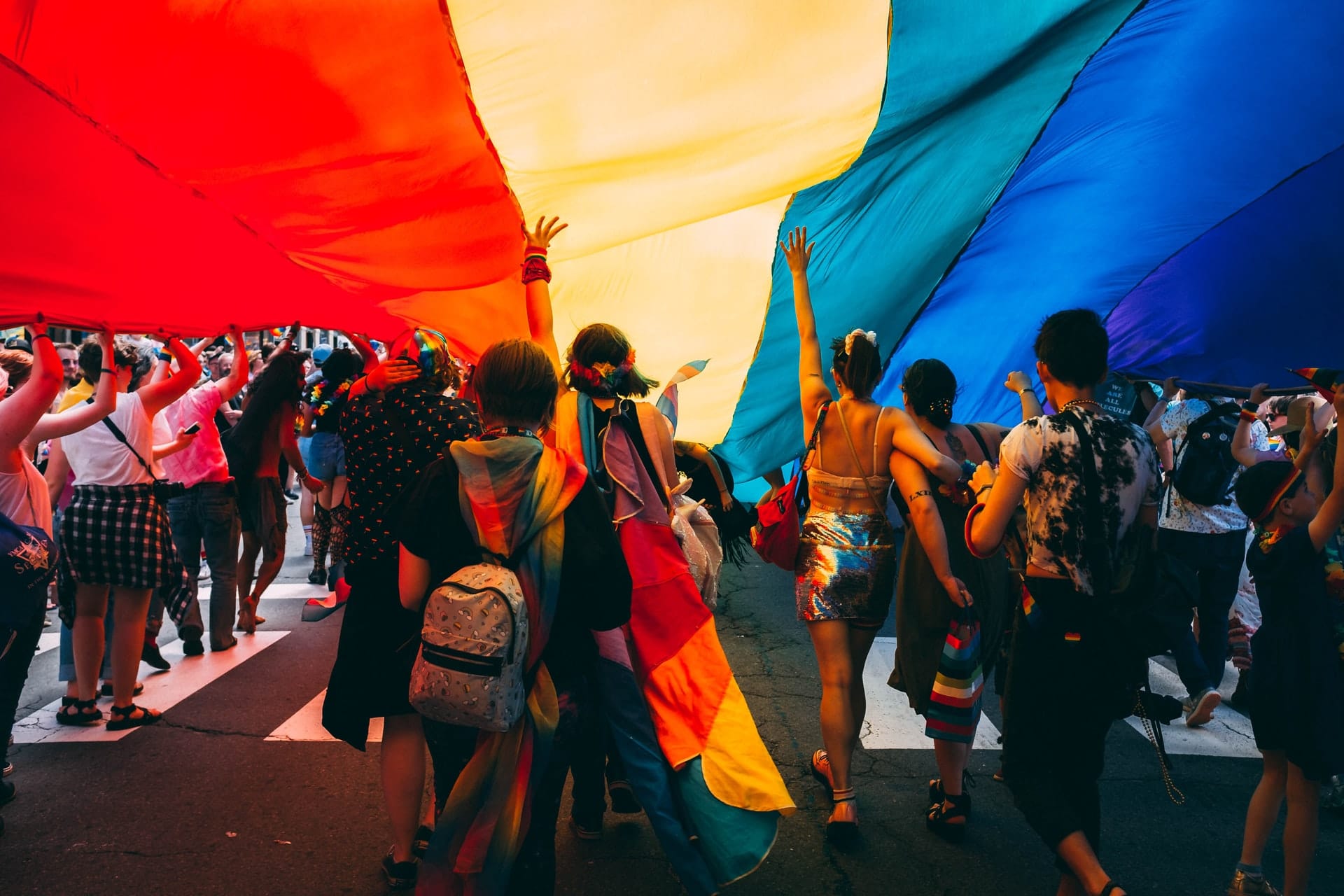 21 LGBT Discrimination Statistics to Get You Waving the Flag

Being different has always been looked down upon and punished by society in one way or the other. No matter how progressive we believe we are today, it’s a fact that those who differ from the norm still experience discrimination.

No one can testify to that more than the members of the LGBT community. These LGBT discrimination statistics show that we don’t all get equal opportunities and treatment.

As part of society, each person has a responsibility to turn these statistics around and work together towards equality in 2021, regardless of whether they identify as LGBT or not.

Now that we’ve been through the most important stats worth knowing, let’s get some general numbers and facts straight. Read carefully and discover how does the LGBTQ+ community feel and what their worries are.

1. 58% of the general public believes that things in the nation are heading in the wrong direction.

If you ask the LGBT population in the US, 55% of them will tell you that things are indeed heading in the right direction. Furthermore, 65% of those who identify as LGBT say that they’re pretty happy. A slightly lower percentage, 57% of the general population, says the same thing.

2. 58% of LGBT Americans have been subjected to slurs and jokes because of their sexual orientation or gender identity.

According to LGBT bullying statistics, 16% of LGBT Americans have been subjected to slurs and jokes in the past year.

Discrimination doesn’t end here, as 30% of LGBT Americans have been threatened or physically attacked.

Furthermore, 39% have been rejected by their family members or friends because of their sexuality.

3. 58% of all LGBT Americans say their sexual orientation doesn’t make a difference in their lives.

On an even more positive note, 34% said they believed their sexual orientation or gender identity was a plus in their life today. Out of this 34%, 46% were gay men, 38% were gay women, and 22% were bisexuals.

The same LGBTQ statistics note that bisexuals are also most likely to say that their sexual orientation doesn’t make a difference in their lives (70%).

4. 56% of those belonging to the LGBTQ community in the US have come out to their mother.

5. 70% of LGBT Americans believe the entertainment industry has a friendly attitude towards them.

63% said the same thing about the Obama administration, and 57% believe the Democratic Party is friendly to them. Only 27% believe so about the media.

One of the most widely known LGBT discrimination facts, though, is that professional sports leagues and the Republican party are unfriendly towards the LGBT community. In fact, the majority of LGBT members think so — 59% and 76%, respectively.

6. 23% of LGBT Americans view Barack Obama as one of the most important figures for advancing the rights of their community.

Other famous people made it onto this list, too. 18% of LGBT members said Ellen DeGeneres was an important figure for advancing LGBT rights, while 3% named Anderson Cooper. Another 3% named Hillary Clinton, 2% said Barney Frank, and another 2% chose Neil Patrick Harris.

7. 49% of LGBT members in the US believe they shouldn’t have to change their way of life or culture to achieve equality.

It seems that those identifying as LGBT are divided on this issue. LGBTQ discrimination statistics show that 49% of LGBT members believe that becoming a part of the mainstream culture and institutions is the best way to achieve equality.

Gay women have the highest tendency to believe that engaging in the mainstream is a step towards equality, as 55% of them think so.

8. 52% of the surveyed LGBT population in the US attended a pride event sometime in their lives.

Another 40% participated in a rally or march in support of LGBT rights sometime in their lives. 39% of those identifying as LGBT are also members of an LGBT organization, and 32% donated to politicians or political organizations that support LGBT rights.

LGBTQ+ community is discriminated against in all parts of the world, but different statistics are showing that the society is slowly making a progress towards acceptance. Let’s see how societies around the world treat the LGBTQ community and what they think of them.

Discrimination against LGBTQ seems to be lessening with younger generations in other societies around the world, too.

Even in the most conservative countries like Russia, we can see a significant rise of acceptance in younger generations. Only 7% of those over 50 find it acceptable, while 31% of those between 18 and 29 do.

11. Stigma still persists in 2020, as only 54% of all LGBT Americans say the important people in their life know about their sexual orientation.

The same LGBT discrimination statistics note that, out of the 54% total, 77% are gay men, and 71% are gay women. It seems the stigma is still the highest when it comes to bisexuals, as only 28% of them claim that the important people in their life are aware of their bisexuality.

Women being more accepting of homosexuality seems to be a global tendency. For instance, 81% of women accept it in Argentina, while only 71% of men do. However, the most notable difference is in South Korea, where only 37% of men consider homosexuality acceptable, while 51% of women do.

13. Barely half of the general public in America is in favor of gay marriage — 51%.

Even though America sees itself as progressive, discrimination against the LGBTQ community is evident; 42% of the general public actually opposes gay marriage. When it comes to adoption, 35% believe it’s a bad thing for American society that gay couples can raise kids.

On the other hand, 21% believe it’s a good thing, while 41% believe that gay people raising children doesn’t make a difference in society.

14. Yet, 92% of LGBT Americans believe that their society is more accepting of homosexuality now than it was ten years ago.

Unfortunately, we’re still in a place where some people think that sexual preferences are so important that they affect your work and/performance. The LGBTQ community is being largery discriminated in the world of business, and the following stats will tell us something more about it.

As well as that, members of the LGBT community make up 6.2% of those with an annual income below 36,000 dollars. This is a concerning statistic, especially since LGBT people make up 4.5% of adults in the US.

Furthermore, 22% of LGBT workers have not been promoted or even paid at the same rate as their coworkers.

16. 1 in 5 companies in the US offer paid family leave for LGBT workers as a part of their benefits.

Transgender people also suffer discrimination as far as benefits go, as only 58% of Fortune 500 companies actually offer benefits that are transgender-inclusive.

17. LGBT discrimination in the workplace is obvious, as 50% of LGBT individuals haven’t come out at the office.

LGBT workers choose to stay in the closet at work because they fear being reduced to a stereotype. On top of that, they feel like coming out would jeopardize their professional connections.

18. 25% of LGBT employees report suffering from discrimination in the workplace in the last year alone.

Half of those who experienced discrimination based on their gender identity or sexual orientation said this had had a negative impact on their work environment.

Suicide rates in the LGBTQ community are staggering and, unfortunately, mostly connected to discrimination and fear. Whether you’re a part of the LGBTQ community or not, we urge you to read these alarming stats about suicide and help spread awareness and understanding.

19. Suicide is the third leading cause of death among the LGBT youth aged between 15 and 24.

Studies have shown that individuals identifying as LGBT are mentally healthy and well-adjusted, but suicide is still prevalent among LGBT youth.

The high rates of suicide aren’t caused by being LGBT but by the discrimination, bias, family rejection, and other stressors associated with the treatment of the LGBT community in their environment.

This is probably why, for homosexuals, being discriminated against is one of the main fears related to coming out.

20. Between 18.8% and 43.4% of gay students seriously considered attempting suicide.

The percentage of heterosexual students who seriously contemplated suicide ranged from 9.9% to 13.2%, marking a significant difference between the two groups of students.

21. According to LGBT healthcare discrimination statistics, 46% of LGBT youth said they wanted emotional or psychological counseling but couldn’t receive it in the past year.

Finally, for 23% of individuals, the number one reason was that they were concerned about finding a health provider competent enough to work with LGBTQ youth.

What percent of students are LGBT?

In a 2016 study conducted by the American College Health Association that surveyed 33,000 undergraduates, 10% of students identified as bisexual, gay, lesbian, asexual, trans, pansexual, or questioning.

What was the first state to legalize homosexuality?

Illinois was the first state to officially decriminalize homosexuality in July 1961. They did this by revoking their sodomy laws.

What is the status of LGBT people in the United States today?

In 2003, the US Supreme Court decriminalized homosexuality completely. The battle for equality didn’t end there, though. On May 17th, 2004, Massachusetts became the first state to legalize same-sex marriage. In 2015, gay marriage became legal in all 50 states.

Even though this improved the status of the LGBT community, it still didn’t bring total equality. Even today, there are laws being passed to ensure that LGBT members have equal rights. For example, the Supreme Court ruled that the federal law protects LGBT workers from discrimination at work on June 15th, 2020.

How many LGBT youth are homeless in America?

20% of LGBT youth experienced homelessness before they turned 18. The overwhelming majority, 71% to be precise, were homeless for the first time after they reached adulthood.

Though these LGBT discrimination statistics aren’t as positive as they could be, they do show progress. It’s evident that our society is becoming more accepting and open-minded. To really give everyone an equal opportunity, we have to look beyond their sexuality and see them for the people they are.

Not abiding by the standardized norm is not a bad thing just because it’s something people are not used to. Change starts with every person who challenges the dogma, whether they’re an ally or a member of the LGBT community.

16 Bumble Statistics to Help You Understand This Awesome App